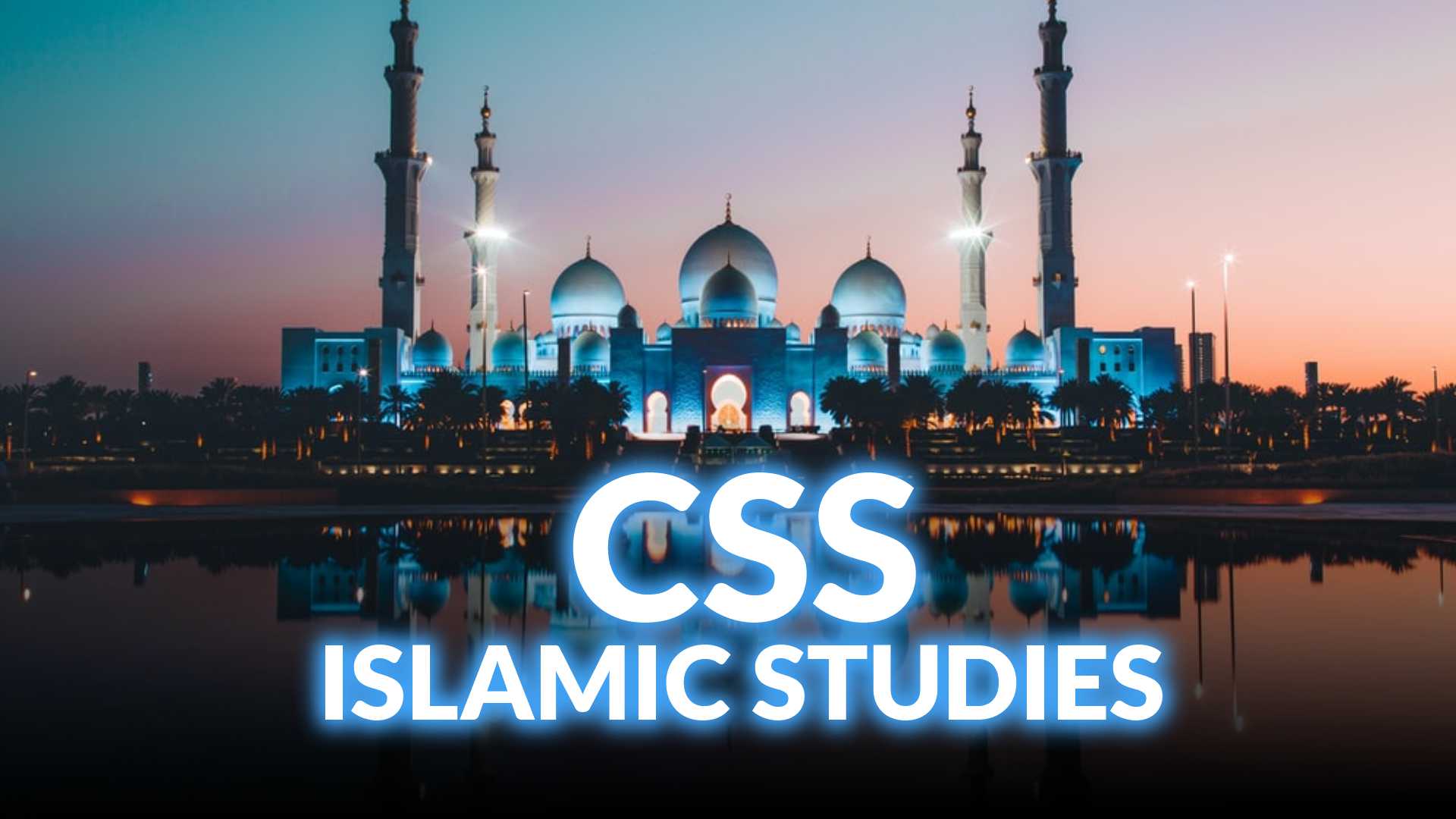 The subject of Islamiat possesses great importance in the CSS exam. It is a compulsory subject. It is worth 100 marks. In this section, the candidate is ought to know the importance of Islam and the basic teachings of Islam. The course is generally based on the value of Islam as Deen, basic beliefs, and pillars of Islam, Islam a religion or deen, and its comparison with other religions. The status of humans in Islam and their relation with Allah along with the status of women in Islam, and the rights provided to them by Islam are topics of great importance. It also covers the topics regarding the systems in Islam, the political, social, judicial, and economic systems. The students should be able to specify the religious, sociological, and historical perspectives of these topics.

Following are the main themes and sub-topics that are a part of the Islamiyat section syllabus for the CSS exam:

2. Study of the Seerah of Prophet Muhammad (PBUH) as a role model in the capacity of:

3. Human Rights and the status of women in Islam

5. Islam and the World

6. Public Administration and Governance in Islam

All the compulsory subjects in the CSS exam are of great importance and Islamiat is one of them. The candidate really needs to ace it in order to get remarkable marks. The thing with the paper on Islamiat is that it is a bit technical in terms of memory. You need to increase your memory power for this subject. It is not difficult to get 75% marks in Islamiat but it is not everyone’s cup of tea. The Islamiat part in CSS requires an individual’s command over writing skills, time management, and pressure handling.

Here we bring you some tips and tricks which will be helpful in acing this subject in CSS:

One of the most important aspects to ace the Islamiat section in the CSS exam is to build a solid reading habit. The subject of Islamiat has extensive information regarding each topic. All the topics are diverse and need a lot of reading to be prepared completely and thoroughly. Hence the key is to read, read, and read. The books on the history of Islam and its teachings can be the ones you would need for the CSS exam.

Making notes is one of the most effective ways of memorizing things. Islamiat is such a subject that includes a lot of critical theory. There is too much information and aspects that you need to keep in your mind. Hence, you should make notes for every topic you prepare. It will not only be helpful in memorizing but also would be effective for last-minute revisions.

One of the most important aspects of the preparation for the CSS exam is to attempt past papers properly. The importance of past papers is something not to be neglected by the candidate. They help the candidate to become acquainted with the exam pattern and the trends.

It is very important for the candidate to improve his/her writing skills. The candidate should work on his/her vocabulary, prose, grammar, expression, and other subtleties. These can add colors to the writing and impress the examiner.  Hence one should practice writing and attempting the questions in order to attain a grip on writing.

Consistency leads to success. Your consistency in reading books, and articles, making notes, and attempting past papers would eventually lead to your being knowledgeable of the Islamic teachings.

Be considerate whether you are comfortable in attempting your Islamiat paper in English or Urdu. No special importance is given to any language. It all depends on which language you have more grip on. If one thinks his Urdu is good he should opt Urdu language and if he thinks he can explain better in English he should go for the English language. The grasp over the language is of pivotal importance.

The paper should be well decorated with ayahs, hadiths, and ashaars related to the topic at least three per page. Write as long as possible including all the small details and points. Give headings and make them prominent. A start and end with hadith or ayah is best.

Avoid giving any expression of liberalism. Be a true Mulla and write only what you are sure of being exact. Writing any Quranic verse wrong can enrage the examiner. Avoid using the word GOD, instead use Allah. Do not criticize any school of thought.

Write as lengthy as you can and discuss all related items in a question. Attempt your best question first and second best last. Try to attempt all the required questions. Make sure that your writing is legible.

*Tabir Academy will send you updates about new courses and deadlines

Tabir Academy is a game-changing, challenge-based e-learning platform. It encourages you to challenge yourself until you master every concept, making you stand out among others. Seeing you succeed makes us happy.

Are you sure you want to logout?

Please enter your email address. You will receive a link to create a new password via email.

Take me back to login!

Please check your email for the passwrod reset link. Use the link to set a new password for your account. If you can’t find the email, make sure to check spam folder.

Resend Password Reset Link
Take me back to login!