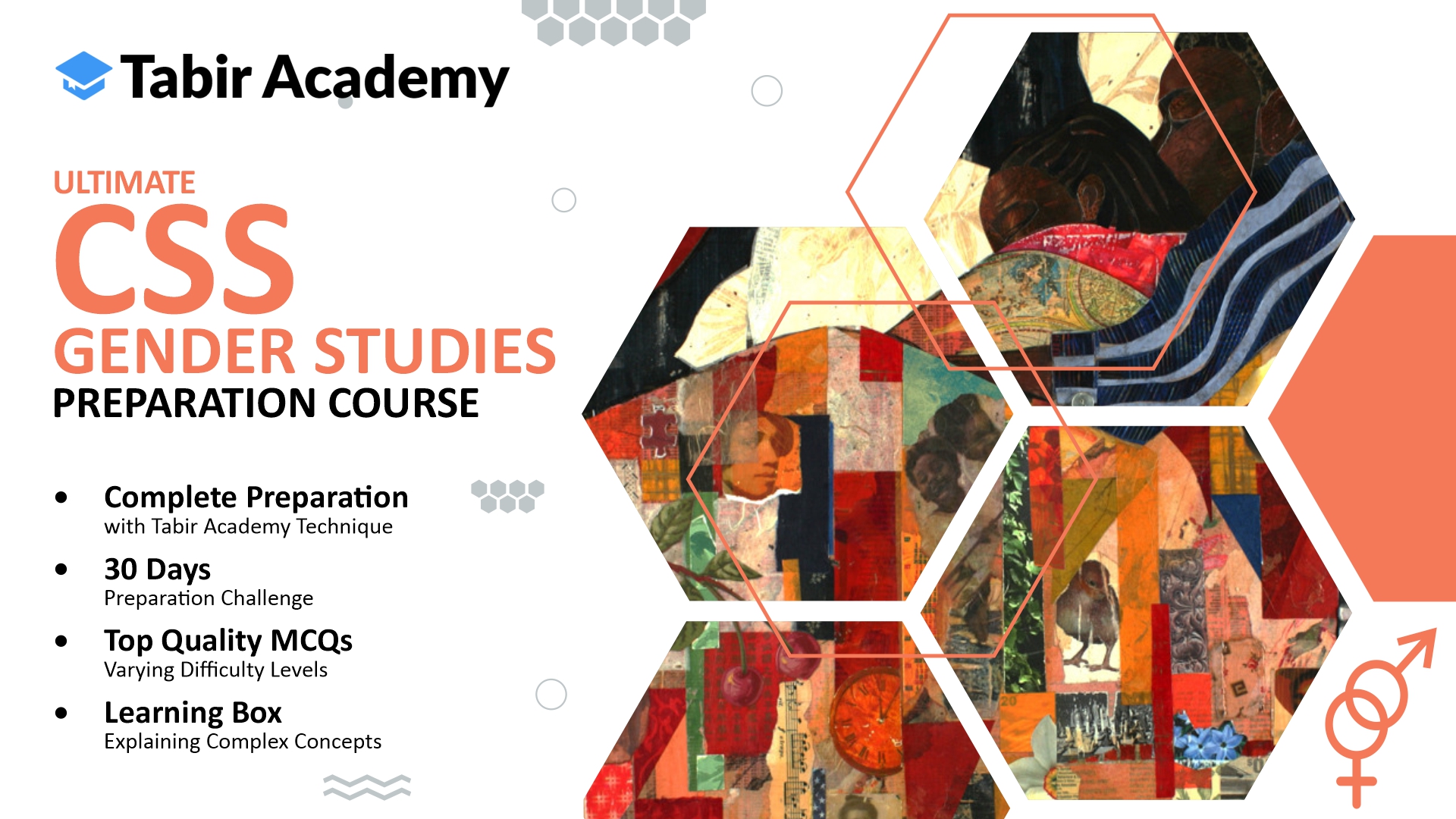 Gender Studies is a part of the optional CSS subjects. It’s a course from the Group V of subjects along with Environmental sciences, Agriculture& forestry, Botany, Zoology, English literature and Urdu Literature. The paper is worth 100 marks, the division is as follows

There will be 7 subjective questions from which you will have to attempt 4. These 7 questions will be one from one category given below

The students should at least have grasp of the sociology of gender and sex. The students will be further tested on the theories relating to gender, gender roles and feminism.

I. Introduction to Gender Studies

This requires the students to have a basic understanding of what gender studies entails, its inculcation in university education. Its comparison with women studies and its present status in Pakistan. The theories of integration and autonomy of gender studies is also very important.

It is very important to have a grasp over the nature vs nurture arguments in the determination of both sex and gender. Whether they are socially developed or biologically determined. It is important not only for this section but forms the basis of the entire course. The theories of feminism, masculinity and Queer theory are very important.

This section focuses more on the history, politics and academic side of various movements related to gender and sex. Theories like liberal feminism, radical feminism, Marxist/socialist feminism, psychoanalytical feminism, men’s feminism, postmodern feminism. The candidate is supposed to have the knowledge of when these theories emerged, in what socio-economic context and what they imply for the society.

Similar to the previous section. Each theory had corresponding movements. Focus on when they emerged, what their objectives and demands were and their success. Feminist Movements in the West, First Wave, Second Wave and Third Wave Feminism, United Nation Conferences on Women, Feminist Movements in Pakistan.

This section demands the knowledge of how various movements and theories have impacted the socio political and socio-economic context of women. In the world and specifically in Pakistan. How has the position of women changed in the public sector, what factors enabled it and what hurdles they faced. Some relevant subtopics are

VI. Status of Women in Pakistan

It requires the analysis of position of women in society with respect to their role in various areas of society. E.g. the health facilities, education and employment opportunities. Furthermore, the issues women face in these arenas of life, whether it be women in law or their employment.

This section is specific to women in politics and administration. This includes hurdles in women’s way to politics and gender bases issues as voters, as candidates, as representative. The implication of women quota in politics. Also keep in mind the main movements and theories which focused on women empowerment relating to politics e.g. the Suffragist movement. These would allow you to add a deep sociopolitical analysis to you answer.

The student should be aware of the difference between violence and gender-based violence along with its causes/ deep roots in society. Understand the theories of violence, of why it happens and its types whether physical or mental and direct or indirect. Finally read up on plausible solutions for this issue, strategies to eliminate it.

They will be asked in connection with violence against women hence answer it in association with the types, causes and issues of violence in Pakistan. The Student should be aware of the stories behind the relevant documentaries and should provide an analysis of the main issues.

Reading is the key to CSS. But unlike all other courses, newspapers aren’t the main source of information for this one. Newspapers are important to teach you writing, grammar and analysis. However, for this course your primary source will be books, journal articles, research papers, academic writings or special columns written on the issues of gender. However, keep an eye on newspapers for news about issues related to sex and gender in society.

CSS prep can get tedious with extensive reading. In such circumstances YouTube also has educational videos which prove very convenient for up to date and concise information. YouTube has video essays and crash courses. E.g., Crash Course with John Green, these channels have videos on important political debates, historical events and theories. So do try to take advantage of those as gender is an issue of the modern age, take help of modern ways to understand it best.

Make a habit of listening to podcasts like Ted Talk, in your free time or doing chores. These are very informational and gradually inculcate knowledge into you. Since they are fun and interesting at the same time, they also provide reprieve from the lengthy reading and writing. Same goes for talk shows and news.

Draw mind maps or take notes of the major points or events related to a topic. Writing helps you understand things better and helps you memorize them. Merely listening might not prove as fruitful but even little scribbling of notes will take you a long way.

Consistency leads to success. Your consistency in reading newspaper, columns, listening to talk shows and making notes would eventually lead to your being aware and knowledgeable about the latest issues around the world. It would give you a stronger grip over the subject and thus a brilliant score in the exam.

Start today! Start as early as you can, start with the podcasts, talk shows and video essays. They also count towards your prep and will help take off a lot of burden at the end

Are you sure you want to logout?

Please enter your email address. You will receive a link to create a new password via email.

Take me back to login!

Please check your email for the passwrod reset link. Use the link to set a new password for your account. If you can’t find the email, make sure to check spam folder.

Resend Password Reset Link
Take me back to login!